Yie Ar Kung-Fu II is a superior sequel to Yie Ar Kung-Fu, one of the first really addictive beat 'em up games. In this second game, Konami adds plenty of new enemies, levels, and attack moves. Although the game is decidedly much more difficult than the first game, it more than makes up for it by plenty of new moves you can perform. Released in 1985, the game is probably the first computer game that allows you to perform special moves, as well as features opponents with distinctive attacks (can someone please confirm this to me?). For example, Yen-Pei throws her pigtail at you, and Li-Jen makes thunder bolts fall from the sky. Instead of fighting martial arts opponents head-on (eight of them this time), you must first fight their little minions in each stage in standard 2D side-scrolling fashion.

If you like the first Yie Ar Kung-Fu (and there's no reason you wouldn't, if you are a fighting game fan), you'll probably enjoy this superior sequel. The high difficulty level dampens the enjoyment quite a lot for me, though, so be advised if you are a reflexes-impaired gamer like me. 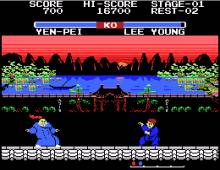