A simple and entertaining arcade space shooter - at least for a little while as the game quite fast doesn't have much to offer if you are looking for more than random space combat with little features. The actual game interface looks a lot like the first version of Elite but of course it doesn't offer anything like a game as Elite and it probably wasn't meant to either.

The actual story in the game is quite simple as you just have to blast up enemy ships. The more you kill the smarter the enemy ships get and of course makes it much more difficult for you to win. But fear not - you can get better weapons and upgrade your ship in other ways as well which is a nice thing in the game as it would otherwise simply be too boring. Sadly this is pretty much it as compared to other games in this genre you can get other spaceships to fly in and this really helps in getting you as a player to quit the game quite fast.

Xiphos can't be recommended as it simply doesn't offer anything new to this genre. The graphics are acceptable but the controls are poorly done, the story in the game is the same in the entire game and only little features are in the game. Only few people will be able to find Xiphos good enough to play for several hours.

Electronic Zoo's Xiphos is relatively unknown first-person sci-fi shooter that recalls Ian Bell's classic Elite in interface and style, although with a much more simplified and narrow scope. The plot is your typical blast-the-alien type brouhaha that isn't worth repeating here, but the action is quite fun, especially since the game features a lot of nicely-rendered polygonal 3D ships that move quite convincingly in combat. Although the game is quite open-ended in that you can fly just about anywhere you please in space, the difficulty level increases (with more, and smarter, enemies) as you terminate hordes of enemy ships. Asteroid fields complicate the challenge, as well as space mines and other stationary obstacles. Anyone why just wants to play a quick blast-them-all game without bothering with the plot can play the "Raid" mode-- a nice touch. After a while, though, Xiphos's appeal diminishes--- you only get to pilot one ship (although you can upgrade armor and weapons), and enemy ships begin to look and act the same way after a while. With no "extra" gameplay options (such as the intricate trading module and diplomacy in Elite) or interesting plot twists (as in Star Crusader), Xiphos in the end is similar to Coke: it sizzles for a while, only to fall flat shortly after. A good attempt, but not good enough for either fans of arcade fun or space simulation. 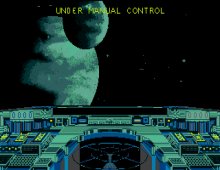 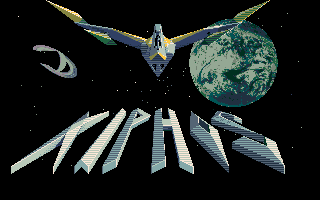 People who downloaded this game have also downloaded:
Silpheed, Skyfox II: The Cygnus Conflict, Strike Base, X-Men: The Ravages of Apocalypse, Star Fox 2