A decent first person shooter. Your typical go-around-blowing-things-up game. This game has alright graphics and gameplay, but the sound isn't really of a very good standard, it tends to get annoying after a while. Overall though, it's a pretty good game.

For it's time Silpheed is fairly good and have some well done features. But compared to action space shooters games made in the early 1990s Silpheed is nothing special mainly because of the graphics and the annoying beeper sounds. In short Silpheed is a regular space shooter game where you have to shoot as many enemy spaceships as possible. Most of these come in small rows and you either have to shoot them or avoid them.

The gameplay is very fast and you often have to reach very fast as the enemy spaceships very often turn to either the left or right just before they hit you which often results in that you end up hitting them anyway because you also move to one of the sides. The spaceship you control is also placed a bit different compared to other games in this genre which is a nice change but of course not that special so it actually changes the game.

As mentioned Silpheed was a nice game in 1987 but was quickly forgotten because of all the other games coming out in 1989, 1990 and 1991 as these games all had better graphics and sound. An average game and only recommended for fans of this genre as you will otherwise be bored after 10 minutes. But the game does offer many levels so you can't complete the game that fast.

For many action gamers, playing Silpheed is a thoroughly captivating experience that is hard to forget. Designed by Thexder designers S. Uesaka and H. Godai and licensed from Japanese company Game Arts by Sierra, this defining moment of the shooter genre is one of the rare games that can sell on the merits of its "bells and whistles" alone: the pseudo-3D graphics is stunning, and the digitized sound and music pushes the limits of tinny Adlib soundcard to create memorable tunes and sound effects. Not that the gameplay isn't special: you must maneuver the space dogfighter Silpheed through 20 action-packed levels that feature diverse backgrounds, enemies, and very cool power-ups you can keep from level to level to prepare for the ultimate showdown with Xacalite, the evil warlord. Although billed as a "sequel" to Thexder, the only thing Silpheed has in common with that game is the (thin) storyline which isn't why you'd play a shooter to begin with :) Definitely one of the very few shooters I struggled to finish despite overwhelming odds, and a must have for every action fan. 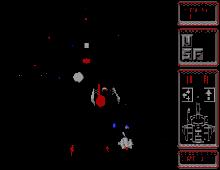 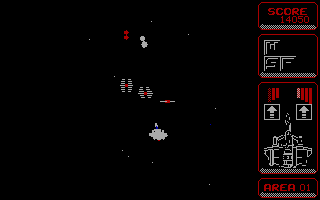