Skyfox II is a fun, early 3D space shooter from Dynamix that marks one of the earliest and few collaborative efforts between its two founding designers, Damon Slye and Jeff Tunnell?long before they became household names in the simulation and adventure genres respectively. Sequel to 1984?s Skyfox I that was unfortunately never released for the PC, Skyfox II is an excellent space combat shooter, with many different missions and detailed bitmap graphics that was advanced for its time.

The gameplay is fast, fun, and surprisingly varied. You will pilot a starfighter on a variety of missions, from locating lost artifacts to destroying the enemy. The enemy ships?Xenomorph fighters in particular?are a far cry from dummy ships of most early shooters: they will dodge your fire, gang up on you, and are deadly accurate with their attack. True to Damon Slye?s reputation, Skyfox II also features some simulation and strategy elements?you can plan your attack, set a course on the overview map, and use autopilot mode. You also have to refuel once in a while, and this naturally puts you in a vulnerable position as enemy ships are always around.

Overall, Skyfox II is a highly entertaining shooter that is much more than a simple arcade-style shoot-em-up. Perfect for fans of space simulations who want some arcade fun, and arcade fans who want something a bit more complex than Space Invaders. 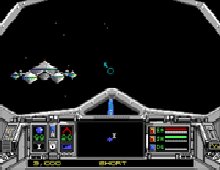