Xenophage is a pretty bad one-on-one fighting game in the same style as Mortal Kombat, although not half as good despite featuring scrolling arenas and some inventive aliens. Games Domain's review says it all about why this game is so bad:

"Xenophage, despite the trend towards 3D fighting games, is a 2D fighter, with a few fancy touches. First of all, the characters aren't hand drawn, or digitised, but graphically rendered. Also, the game uses a technique first seen in Samurai Showdown, where the view zooms in and out to give the player the best possible view of the action. If the fighters are close together, the camera will zoom in, and if they are apart, it zooms out. But it takes more than gimmicks to make a succesful game.

[Xenophage] is, at best, average. The moves are stilted, the sound effects are uninspiring, and the characters feel unresponsive. It's difficult to say exactly why Xenophage doesn't work, but it just doesn't feel right. It's the difference between Rise of the Robots and MK3 (Mortal Kombat 3). I really did try playing it again, in the hope I'd missed something, or that the game would suddenly 'click', but alas, nothing. Even two player mode failed to add anything. Sluggish, and sub-standard, despite all the graphical tricks."

The main problem with Xenophage is fundamental: the control scheme is horrible. By which I mean it is almost impossible to pull off any of the special moves, and sometimes the game just doesn't register key presses despite how many times I hammer them. If you enjoy playing fighting games just to laugh at its incompetence, then Xenophage fits the bill. 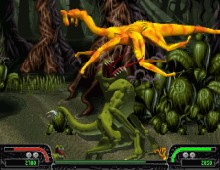