Super Mario vs. NWO World Tour is a competent fan-made spoof of WCW vs. NWO Nintendo 64 game. SMNWO attempts to bring some of the fun of the original side-scrollers back, and it largely succeeds, while slipping Sonic in as a playable character in addition to familiar faces from Marioland.

Your goal in this action game is to earn 20 stars, and you do this mainly by competing in the Mario Kart minigames, which are pretty decent. In these games, you control Mario characters from a top-down perspective as they race around the track. However, the traditional side-scrolling action stages, which are the other main theme in the game aside from racing, are much more fun. Too bad they didn't play a more vital role in the game.

The control schemes for all the characters are excellent, except for Sonic who (understandably) behave much more like a Mario character than his old flamboyant flipping self. Graphics are above average, although characters have rough black edges around them that make the amateurship a bit too evident. The bottom line: if you're not a Mario or Sonic fan, you probably would find the game only a bit more fun than your average platformer. I enjoyed it quite a bit, and I'm not a die-hard Mario fan by any means. Mario fans will definitely find much to like in this old game. 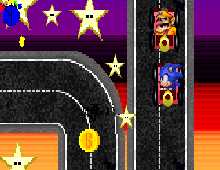