WWI Medic is a fast-paced, unique, and violent action game. In contrast to most other games set in world wars, your objective in WWIM is not to take lives but to save them: as a field medic, your goal is to save as many Allied soldiers as you can from enemy fire. The game starts with the Axis and Allied soldiers on each end of the screen, blasting each other to smithereens. While searching for wounded soldiers to heal, you have to avoid a wide range of obstacles: from machine gun fire, mortars, mustard gas, and even enemy biplanes. You lose points if a wounded soldier dies. This is more difficult than it sounds, because your squad tends to get mutilated very quickly as they blindly "rush" the enemy squad every so often. The trick is to stay in the trench, but not so long as to let your colleagues die from their wounds.

Although they look amateurish, the cartoon graphics in WWIM is more than serviceable. Given that they are drawn in 2D with a limited palette, the explosion and mustard gas effects excellent, and death animations are funny. Don't let the cartoony graphics fool you, though: after a few minutes, the game looks like a game from Bloodlust Software: the ground quickly fills up with dead bodies, a lot of blood pools, and mortar shells.

Although the game is very easy to pick up and get into, the downside is that after the first 15 minutes, you will have seen all there is to see in the game. It is a lot of fun, but ultimately it lacks the quality that makes simple arcade games like Robotron: 2084 so replayable. A good and unique coffee break game overall, but don't expect to be able to enjoy it many times in a row. 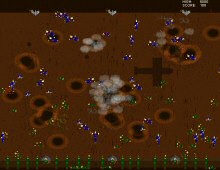