Wrath of The Sea King

The latest Bloodlust game is an excellent mix of shooting, puzzle and reflexes. The new hero is an adventurer called Dust, who in 1899 started to search for a cure to what he considered his worst curse: headaches. He found a magic pendant which seemed a good remedy, but it was a mistake: it made him immortal, with a price. The headaches remained. Dust spent many years in vain, trying to die. In 1994, he finally found out that the talisman of the Sea King, Poseidon, can create and destroy life. He steals a submarine to reach the palace, and so the game begins... The story is narrated in the great "Dust Sketches". Give them a look before playing, they deserve it.

Basically, in almost all rooms you have to find a way to exit. Simple, in words. The facts are different. On each screen, you will be faced with varied challenges, often very creative and original: sometimes you simply have to kill everything in sight; some others you must solve puzzles; other times, only your reflexes will save you from devilish traps. In the last part of Scene II, there's a choice between three different paths, each with completely different challenges. Once in a while, you'll also meet strange bosses. And, in the so-called "swarm stages" (screens full of monsters to kill), you can use a Robotron-style control - Dust can walk in a direction and fire at another, by using the numeric keypad. The presence of the twisted minds of Hellbent Deathspew and Co. as game designers is unquestionable ;)

For a game made with Game Factory, this is surely a beauty. Dust is only a small bunch of pixels, but he moves on wonderful backgrounds, and he often makes Duke Nukem-esque comments. Cutscenes are great too. And, of course, there's the usual gory humor, a Bloodlust trademark. Having unlimited lives (he's an immortal, after all), reaching the final confrontation with the Sea King doesn't take too much time. But, the less times you die, the more you will be rewarded, being able to see the entire ending - and, believe me, it's worth the effort. The real challenge is finding the way of dying the less possible times. So, very good replay value. 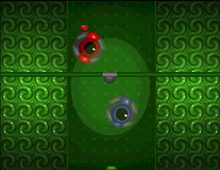 Wrath of The Sea King screenshot