Wingstar is a relatively obscure vertical shooter from InterActive Vision, a small Denmark-based developer of action and flight sims with roots in ZX Spectrum and Commodore 64. The plot in this sci-fi shooter is straightforward: sentenced for crimes against the empire, you are forced to become the empire's frontline warrior in its quest to conquer new planets.

Wingstar plays like dozens other shooters that we are all familiar with. Shoot everything in sight, upgrade to new weapons, kill the big bad boss to go to the next level, etc. While definitely not a classic that Raptor or Tyrian was, Wingstar stands above the average shooter with over 50 weapons you can acquire, excellent sounds and music, and outstanding ship and background design, down to little insignia details on enemy ships. With 5 different skill levels, Wingstar should keep every shooter fan glued to the screen for hours on end. 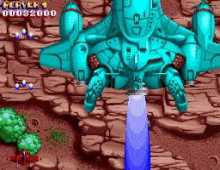