One of the most underrated shooters ever made, Stargunner is a great sci-fi side-scrolling shooter that features excellent gameplay and outstanding graphics and sounds. The story, if you need to know for shoot-a-thon game, is straightforward: "...deep within the Andromeda galaxy, the people of Zile grow restless--and greedy. The Zilions secretly prepare for a massive strike against the nearby planet Ytima. Fearing such an attack the Ytimians train an elite squad of "Stargunners." Their mission: To strike the planet Zile first, and cripple the Zilions three strongholds, where the Zilion war fleets await the launch order. If the Stargunners can surprise the Zilions on their own planet, and destroy most of their fleet, then good will triumph at least one more time."

Gameplay is nothing Raptor fans haven't seen before: shoot everything in sight, collect power ups, and survive long enough to fight the end-level boss to get to the next level. The shareware version has 6 levels, including two space, two land-based, and finally an underwater level. Compared to the shareware version, the registered version offers 34 levels, more weapons, some very slick cinematics cut-scenes, and more addictive gameplay. Overall, Stargunner is definitely a must-have for fans of shoot em-ups - it rivals Tyrian in smooth animations and graphics, although the gameplay is not as varied. 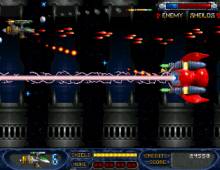