Tyrian is one of the best top-down shooters ever made for the PC, period. With excellent graphics, smooth animations, and many inventive enemies and levels, it remains one of the best-loved shooters that still stay on many fans? hard drives. Newcomer XSIV Games had a lot to live up to in developing the unofficial sequel to this masterpiece, but fortunately, Tyrian 2000 more than deserves the Tyrian name.

First look at the game should comfort every old-school arcade fans that XSIV Games is on the right track. Instead of upgrading the original game?s graphics to modern-day 3D pizzazz, the designers chose to use the same 2D VGA graphics that Tyrian fans are familiar with. The game offers several game modes including: One Player Full Game, One Player Arcade Game, Timed Battle, and Two Player Arcade Game. The game has three difficulty levels, 10 ships and over 100 weapons. The goal in every mode is basically the same: blow away your enemies and rake in as many points you can, and try not to die. You only have one life, but there are enough power-ups and add-ons to keep you going as long as you don't become careless.

The difference between One Player Full mode and the other modes is the option to buy new parts for your ship before every level. Your flight takes you through a set of campaign missions, and credits are built up by collecting points and space coins which flip through the air after you destroy certain vessels. Eventually you can upgrade your rear, side, and front guns, making your ship a force to be reckoned with. The high difficulty level of Tyrian is back, but even more difficult this time around. You have shields that are constantly diminishing, there's no way to prevent yourself from getting hit unless you have godlike reflexes, so you need to be careful.

The sound is very nice, with original synthesized music tracks, and a jukebox to play them outside the game. These tracks come in CD Audio format, so you can also play them in an ordinary CD player. With 65 levels that span over 5 episodes, multiplayer modes, and the same furious gameplay that Tyrian fans miss, Tyrian 2000 deserves to go down in history as one of the best shooter sequels ever made. Billed as an affordable alternative arcade game, Tyrian 2000 serves to remind everyone that it doesn't always take a high budget gaming machine to satisfy. 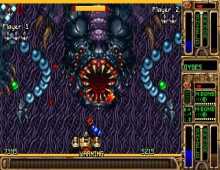