Wrath of The Demon

In early 1990s, Readysoft released a number of animated action games that became instant hits on the Laserdisc platform, although their PC counterparts suffered poor sales in comparison. This is by no means surprising: although these games boast very high production values and excellent animations which are created by Don Bluth Studios, their value as a game is sorely lacking. These game are little more than PC version of "choose-your-own-adventure" books, in which gameplay is boiled down to choosing an action from multiple choices. PC versions are, naturally, cut-down versions from Laserdisc originals, with many sequences missing altogether. It wasn't until the advent of CD-ROM that Readysoft (now sold to Digital Leisure) started making "deluxe" version of these games and put them on CD-ROM and later DVD. Treat the games as fun and humorous computer cartoons, but don't expect them to be involving games. If you like any of these disk-based versions, check out the deluxe DVD/CD-ROM versions at Digital Leisure's products page.

"A nice side-scrolling action game converted from the Amiga. Similar to the popular Shadow of the Beast by Psygnosis but still a unique game." Wrath of the Demon is one of the rare titles from Readysoft that wasn't based on Laserdisc arcade game. Well worth a look, especially since it's much more interactive than later bloated "animation extravaganza" that are masqueraded as games. 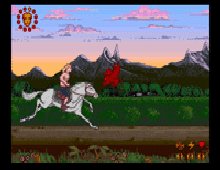 Wrath of The Demon screenshot