One of the most unknown, underrated games ever made, Wrath of Earth is a fun futuristic FPS with quite a few innovations that are rarely seen in today's 3D-accelerated games. You play either a male or female commander who is sent to investigate the chaotic situation at the Aragon mining colony, where mining robots run rampant, most humans are dead, and an alien invasion is rumored.

Gameplay is best described as SSI's Cyclones, except a bit less detailed. You view the gameworld from your bio-suit, which gives you a plethora of status displays, including 6 separate gauges that show major statistics, ranging from your health, radiation level, and armor. Weapons you collect and be viewed in close-up screen, which gives you detailed statistics, including type of ammo required, damage power relative to other weapons, etc. Your bio-suit also has many interesting instruments, including an infrared headlight and sonar. On-screen crosshairs automatically identify objects and lock on targets similar to System Shock, except that in Wrath of Earth you cannot jump or look up or down as the engine is not true 3D. The game also features many NPCs similar to Strife, guided weapons, and many well-designed levels, both indoors and out.

Overall, Wrath of Earth is a solid FPS that is highly recommended to anyone who likes action games. It unfortunately got very little attention when first released, owing largely to lack of marketing and shareware status. 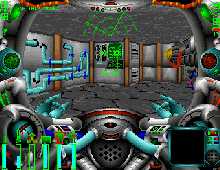