Wkobo is a superb fanmade remake of Xkobo, one of the best freeware games for Linux systems. Like Xkobo, Wkobo is a fast-paced multiway scrolling space shooter similar to a cross between Raiden and Asteroid.

The game is simple to learn, but is very addictive. Your objective is to destroy all the fortresses on the screen by shooting laser beams at them. You control your ship by pressing the cursor keys or moving the mouse, and shoot by pressing SHIFT or left mouse button. That's all there is to the game - but that's more than enough to keep you glued to the screen. Crisp graphics, nonstop action, plenty of enemy fire from 360 degrees, and smooth gameplay make Wkobo one of the best coffee break games I have seen for action fans. There is even a neat little radar screen you can use to track where enemy ships are coming from. Highly recommended, especially if you enjoy simple-but-fun shooters. 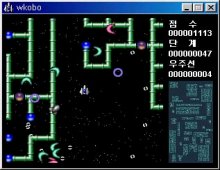 People who downloaded this game have also downloaded:
WinDepth, Vsys Gaiden (a.k.a. Techno Sylph), Xadlak Plus, T2002, Puchiwara No Bouken