WinDepth is an excellent modern fanmade version of Atari's classic Depth Charge submarine-sinking game. The idea is simple: you control a battleship that drops depth charges from the surface to destroy submarines down below. Since the charges take some time travelling down, timing is essential. When a submarine is hit, its explosion will destroy any other submarine in the vicinity of the explosive fireball. This means you can create a chain of explosions (and get massive combo points bonus in the process) if your timing is good enough. You start out with a limited number of depth charges, but you can quickly replenish your supply if your hits are accurate - each submarine you destroy will give you one new depth charge.

As in the original Depth Charge, the challenges you face grow with each new level. You have to dodge mines from submarines, as well as homimg missiles in the later levels. From time to time, you will qualify for "air support" -- an airplane will fly overhead and drop bombs into the water, destroying any submarine that is hit. After every few levels, you will be awarded with a "bonus level": rows of submarines in neat formations, tempting you to drop the charge accurately to trigger an awesome chain of explosions that will destroy them all with one hit. Crisp and colorful graphics round off this excellent fanmade remake that you shouldn't pass up. 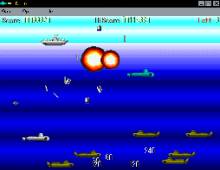