Strike II is a fun 3D action shooter by Millennium, sequel to Thunder Strike. The thing I love most about this game is the presentation surrounding the actual action. Mixing absurd classical music with even more absurd graphics - lovely. The game itself is solid 3D shooting action, controlled with the mouse, which works very well. The solid-filled 3D graphics serve their purpose very well, with many background and object details that are much improved from Thunder Strike. The missions are varied and completing them earns you money, which can be used to repair your ship and/or to buy additional equipment for it. And there's quite a wealth of new equipment and weapons to choose from. Last but not least, you can also choose between four alien races as pilot of your ship, each with their own characteristics as well as different ship designs.

With excellent mission-based gameplay and graphics, Strike II will appeal to all fans of futuristic action games. If you like Konami's Killing Cloud but find it too easy, Strike II is the logical next step. 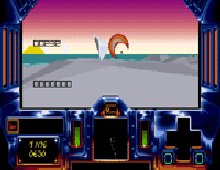