T2002 is a superb Windows clone of Factor 5/Rainbow Arts' classic platformer Turrican, which was unfortunately never released for PC (unlike its sequel Turrican II). The plot - somewhat superfluous for this type of furious action game - is as follows: Turrican is a droid created in the far future to destroy all hostile droids that threaten the survival of the human race. Armed with the latest in weapon and armor technology, your task is to survive the onslaught of enemies on each level and make it to the exit alive.

What makes the original Turrican a timeless classic years after its release is a combination of top-notch gameplay and a wonderful freedom of exploration. The levels are huge, full of many secrets and lovely background graphics that make the world come alive: with flowing water, howling wind, and numerous other details. Turrican and its sequel are no doubt two of the largest action games ever made in terms of playing areas. Amiga fans will also cite the excellent soundtrack - some of the most memorable in any game - composed by legendary Chris Huelsbeck.

So how could a fanmade effort like T2002 measure up to the classic? In short: original graphics (from DOS version of Turrican II and sprits from the Amiga version), original music (Huelsbeck sounds better than ever in TFMX and MP3 formats), the same frantic gameplay, and two new levels that are tougher and larger than the original. If you like platformers, you simply cannot pass up on this outstanding remake that brings one of the best 8-bit games ever made to PC screen. Highly recommended. 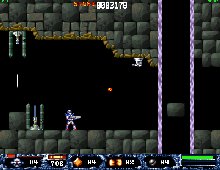