A much-improved sequel to Commodore 64 platform classic Wizball, Wizkid deviates from the original in many ways. The screen no longer scrolls around a level, and Wizkid cannot bounce around like his predecessor. The basic action premise of Wizball (i.e. remove all enemies) has been greatly expanded to include puzzle and adventure elements, adding a lot of depth to the already unique game.

Playing the game is done on two layers. On the surface, Wizkid is a simple arcade game where you guide the head (yes, head) of Wizkid around, trying to knock blocks off from the screen so they hit the baddies, killing them. Killing all baddies completes the level. Not that special, but there's more. If you bash all the bricks on a screen and haven't removed all the enemies, you are taken to a room where you must solve a crossword puzzle of sorts. If you don't complete the puzzle within the time limit, you are taken back to the action portion of the game, and must start the level over again.

So far, this arcade portion of Wizkid is similar to Wizball, only more fun, colorful, and much more difficult. The game adds a whole new dimension in the adventuring portion, though: you can collect a whole series of bonus notes, and they'll play a tune, allowing you to re-embody your head and access the layer underneath the arcade game. Here, you can walk on the scenery, not above it like you did when you were just a head. As a body, you will be limited by gravity (like a normal human would), and can jump around and interact with on-screen objects, such as ringing bells or cranking wells. Some of these items require using items in your inventory, although this adventure-game element is very easy and primitive, and serve merely to add some variety to the game. There are many "extras" and surprises that keep gameplay fresh. You can gather coins, which are dropped from the sky once you clear a level. Collect enough coins, and you can go to a shop to buy items needed to progress to the next level. You can also store items in Wizkid's pockets. Last but not least, if dozens of levels and two styles of gameplay aren't enough value for your money (zilch, in this case), Wizkid features secret levels aside from the normal ones, as well as the (semi-annoying) cat from Wizball.

Overall, Wizkid is a great conversion of the Amiga game, with lots of wacky humor, secrets, nice graphics and music. While not a groundbreaking game that Wizball was, Wizkid is still a very special, unique game that would appeal to anyone looking for a unique action/puzzle/adventure blend. Beware of extreme difficulty in the later stages, though. Highly recommended! 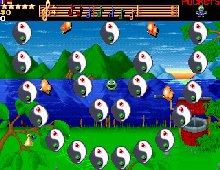 People who downloaded this game have also downloaded:
Wizball, Paperboy 2, Wkobo, Prince of Persia 2: The Shadow and the Flame, Fury of the Furries