An average game based on the equally average Disney movie, Who Framed Roger Rabbit? is a 3-part action game that follows the movie's plot: cartoon rabbit Roger is framed for murdering Marvin, the gag king, and is now on the lam. Overall, the game is a fun diversion, but for a short while only. Awkward controls and sub-par graphics add insult to the injury. 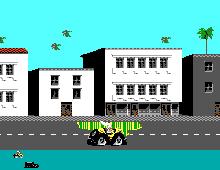