War Gods is a shoddy 3D fighting game that is similar to Mortal Kombat -- but unfortunately only in the gore department. With a lot of violence, blood, and gross "fatalities" attacks, War Gods and Mortal Kombathave very similar feel. Yet somehow Midway managed to botch up the gameplay so badly that it's far from being Mortal Kombat or Turok, a much more superior 3D game.

Fighting games are never known for thought-provoking plots, and War Gods is no exception. Here's the skinny: an alien was transporting a cargo of life-giving Ore when his ship lost control and crashed into Earth. The dispersed Ore turned hapless men and women into wild and wacky mutants who start beating the hell out of each other for no apparent reason. Tacky and contrived, sure - but then again, you can't expect better from this kind of games.

Unfortunately, beyond good graphics and interesting fighters, there's nothing else to recommend in the game. Once the fighting starts, everything that can go wrong does go wrong: characters move like they are stuck in a tar pit, with very choppy animations; the controls are awkward and very difficult to get the hang of; some of the moves are ridiculously too powerful (plus very easy to pull off); the fighters don't even obey your orders even when you're slamming the buttons in frustration; the difficulty is very uneven - some enemies are much harder to beat than others you'll fight in later stages. Finally, there is no reward whatsoever in beating the game. If you're used to nice ending scenes for each character like in Street Fighter game, you are in for a big disappointment in this one.

All in all, War Gods is a subpar fighting game nobody should bother playing. Interesting fighter design and creative fatalities can't save the game from the frustrating controls and uneven difficulty. It's nowhere near as bad as Rise of the Robots, but it's still far from the caliber of Virtua Fighter games. Stay away unless you are a masochist fighting fan or really want to see what Mortal Kombat done in 3D (minus the fun) would look like. Don't say I didn't warn you. 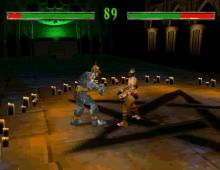 People who downloaded this game have also downloaded:
X-Men: The Ravages of Apocalypse, House of the Dead 2, The, Mortal Kombat 2, FX Fighter, Night Breed: The Action Game