Wandering Fighter is a cool Japanese-style platformer from Miguel "MIG2" Perez, maker of Castlevania-inspired gems including Lost Valley. Although Wandering Fighter is neither as long nor as challenging as Lost Valley, it is still a very fun game that will remind you of the good old days of SNES and SEGA console platformers. The graphics, in contrast to MIG2's earlier games, are all original, i.e. drawn by the designer (although I never understand why using graphics that is "ripped" from other games is a big taboo for some gamers - after all, if the designer always acknowledges his sources and crafts a great game in tribute to the game companies, we should all thank him instead of heaping disdain). There are over 10 levels, and in the tradition of platformer/RPG hybrids such as Zeliard, you can buy more powerful weapons, armor, and other items the further you get in the game. I find the movement of player character a bit awkward and jerky, but the animation overall is smooth, the gameplay is varied. If you miss the days of Castlevania and other 8-bit classics, playing Wandering Fighter will be like a fun trip down memory lane. Recommended, although beginners to the genre should be prepared to replay it many times: it is much harder than your average platformer. 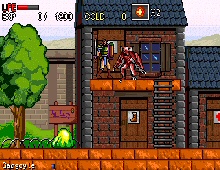