Wacky Funsters is a fun tongue-in-cheek game from Tsunami that is entertaining, although lacking in long-term play value. There is even a semblance of a plot: King Wacky of the Funsters gaming realm has summoned you, the nerdy gamer, to help rescue the land from the evil Duke Waynington. To do so, you must compete in 5 mini games, each of which is a parody of well-known games.

The five mini games range from enjoyable to downright abysmal. At the lowest end of the fun spectrum, Ping and Steroid are repetitive, bland, and simply very boring. Big Guys with Muscles is an okay fighting game that is very easy, but manages to keep the player's interest with innovative weapons and humourous attack moves. Rambi (from Rambo + Bambi) and Roadkill (variant of Sierra's Frogger) are by far the best of the bunch, as each of them features funny characters, challenging gameplay, and entertaining commentary.

The designers obviously wanted Wacky Funsters to be a funny game. The result, however, is a mixed bag due to inconsistency in game quality. Between the games, you can go back to visit the King for some humorous interludes, but after a while, you'd wonder whether this empire is worth saving after all. Fun for a few minutes, until you discover the much better sequel Geekwad Games of the Galaxy or Bloodlust's action games. 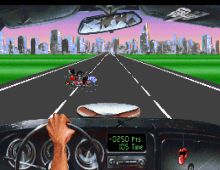 People who downloaded this game have also downloaded:
Viz, Pandemonium 2, House of the Dead 2, The, Uncertainty Machine, The, Vampire