The Uncertainty Machine is a fun freeware sci-fi point-and-click adventure game. Here we have the same hackneyed "dangerous new invention threatens survival of the world" premise seen in countless other games, but the designer Eduardo Campos deserves credit for putting an interesting, real-world physics chrome on top of this underlying premise. Set in a not-so-distant future world, the game casts you as Susant Gant, a young female reporter who, not unlike Sierra's Laura Bow in her aggressiveness and curiosity, has been assigned to report on a burglary case. Naturally, you soon discover that the case is bigger than you think, and it is not long before you learn about a secret device that several parties are after... a device that could change the fate of mankind.

The first thing you will notice about The Uncertainty Machine is the graphics. In contrast to most other amateur adventure games, the SVGA scenes in this one are very well drawn, with a lot of details - even if there are few objects you can interact with. Given the excellent graphics, it is all the more unfortunate that the inventory items have jagged edges that make them look like cardboard items. Moreover, characters in the game move in a laughable fashion: they just "glide" across the screen like a 2D paper doll that you can only see the front of. I realize this is possibly because Mr. Campos did not animate the backs of his characters. Still, making the characters move more realistically would have made The Uncertainty Machine look much more polished and professional.

Enough nitpicking - we all know that good graphics do not necessarily mean a good game, right? Luckily for us, The Uncertainty Machine is a good game. It has plenty of traditional inventory-based puzzles that are both logical and interesting (including a pretty clever use of nail polish), an intuitive mouse-based interface that fans of Broken Sword will feel at home with, and a good dose of real-world physics that lends an air of authenticity and depth to the game, even if it's not entirely accurate. Schrödinger's cat, the uncertainty principle, and even a Beneath A Steel Sky-style (dystopian) vision of our future are woven into the game, creating a compelling experience. I felt the game was slightly too easy - even with dozens of rooms and inventory items, it took me less than 3 hours to finish, and much of the time was spent doing some annoying pixel-hunting. But all in all, it was a fun experience while it lasted, and there are even multiple endings (the game generously autosaves for you right before you get to choose). Recommended. 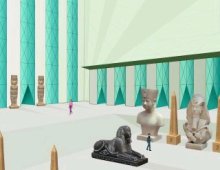