One of the longest freeware adventure games ever made, Other Worlds is a fun point-and-click adventure from Greece that boasts a sprawling gameworld, captivating plot, solid writing (inspired by Stephen King's Dark Tower series to boot), hundreds of mostly-logical puzzles, and interesting NPCs. You play Natalia, a 27 year-old woman who comes home one day to find that her boyfriend Alkis has gone missing. After discovering a strange message, you will shortly find out there are other worlds than ours, and traversing those 'parallel universes' is imperative to finding Alkis again. Just Adventure's thorough and deservedly gushing review does a good job of convincing adventure gamers why they should play this epic game that at first glance looks very amateurish - largely thanks to garish graphics that don't mesh together very well:

"The game is pretty simple to learn. The controls are similar to Sierra's SCI1 system (King's Quest V, Space Quest IV). There are cursors for walking (which changes to an exit cursor wherever there's an exit), looking, using/taking and speaking, as well as separate cursors for each inventory item. Later in the game, Natalia will discover that the "Thread" is strong in her and that she can manipulate it in the form of spells, which will produce a cursor for spell-casting. There is a problem though, that appears with the walk/exit cursor. On certain occasions the area/hotspot where the walk cursor changes into an exit cursor is very small and it's pretty easy to be missed. Also, sometimes, even though the cursor has changed from walk to exit, Natalia will not leave the area and will need to walk around a bit in order for the exit to work. Finally, there are one or two areas where the exit cursor appears even though there is no available exit yet - a limitation of the engine, according to the developer. Oh, and if you want to know what time it is at any moment, just look at Natalia. She will look at her watch and tell you the time, which will be read from your PC clock! No need to look at the clocks around you anymore to know if it is bed time! A very clever little touch that shows the game's attention to detail.

All that is great, but an adventure game is nothing without puzzles and there are plenty of those in Other Worlds. Most of them are inventory based, but there are a few of a different kind, like deciphering a coded message. In general, the puzzles are not very hard, but they are not a walk in the park either. They are very clever and you will need to use your brains as well as your imagination in order to progress. Remember, this isn't real life, it's an adventure game. If I wanted to use plain raw logic and no imagination, I would ask someone to hide my keys and then I'd try to find them, I wouldn't be playing adventure games.

On the downside, there is one dead-end and one place where the game crashes. There might be a newer version of the game coming out, but until then I'd advise you to not use the oil can inside the car (crash) and to save before you enter the boat, and keep that save unaltered. You can also die in Other Worlds, but trust me, that will not be a problem from one point on!

In a nutshell, Other Worlds is probably one of the best, if not the best, adventures of 2004 - and that includes both Independent and commercial - and its minor flaws do not take away anything, except the + sign from the final grade! It is an adventure that has all it takes to become a classic. No, you will not find breathtaking graphics, lip-synced speech or quadraphonic music performed by the London Philharmonic Orchestra. What you will find is a fantastic story that will unfold before you minute by minute with enough twists and turns to keep your interest peaked at all time; characters that seem so real that you will become attached to them and will not forget them for a long, long time (if ever!); and very clever and balanced puzzles to keep your brain churning full speed ahead. And all that garnished with a great deal of humor, that will have you rolling on the floor laughing - that is, if you can appreciate good humor. In other words, a model adventure game, created by an adventurer for adventurers." 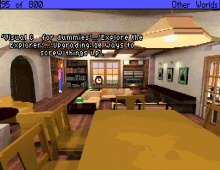 People who downloaded this game have also downloaded:
Maniac Mansion Deluxe, Out of This World (a.k.a. Another World), Out of Order, No-Action Jackson