Virus: The Game is a classic example of great idea gone to waste by horrendous execution. Games Domain's uncompromising review of this unique old game says it all:

"Virus is a strategy game, well hidden in a Descent- style engine. It makes its levels out of the file structure of your computer's hard drive, which is quite unique. The plot is somewhat weird: A virtual Virus has been released into your computer and it's up to you to stop it. Otherwise you'll witness the ultimate decline of your entire system and the destruction of all your work. The virus will attempt to shut you out of your computer, kill your mouse, paralyse your keyboard, smash your windows [oh please..] and corrupt your files. Have you got what it takes to stop it?

The first level in the game is like this: You are placed in an attack craft, and you have to roam around in a lessened version of your directory structure. The task is to destroy the viruses residing in your files. These are shown in an Explorer-esque bar to the right, and the very file room you are present in is highlighted. The annoying bit here is that the file manager bar is too small; you need to scroll to the left and right all the time. And changing to 800x600 or higher doesn't work. Just another one of the distressing things Kidum could have fixed. The second level introduces you to the strategic part of the game; you'll need to build up a base and construct attack crafts and Kilobyte collectors. Kilobyte collectors are unarmed units designed to harvest KB which can be converted into energy by your KB Transformer. Energy is what you need to build things. However, new viruses will constantly attack your base, making it very hard to construct a base, even on the basic levels. And that's really what the essence of this game is: To collect kilobytes to build up your base, and then kill the virus. You can tell your units to patrol between two locations, auto-pilot them to new locations, and other various commands. You can take control over your units, and move them around manually, and this is the method of preference. The auto-piloting works terribly, and the game runs very slow when you use this feature.

Virus tries to combine the strategy and action genres. It fails in both aspects. There are not more than 10 units, which is a low number for a strategy game. Total Annihilation has 150, and that says a lot. And Virus is not a good action game either; it's nothing on titles like Descent 2 and the classic Terminal Velocity. But what's making Virus REAL bad is the fact that it's not scary nor involving. It has not any features that make it interesting, or no features that makes it worthwhile to purchase. It barely escaped the heinous GDR Junk award, thanks to its originality. Because frankly, it stinks, and you should not under any circumstances purchase it. And the great deal of major and minor bugs in Virus does not make things better. It's an interesting twist on the genre and it's original, but hey, that really does not help when the game plays like a wet fish. It does not look the part either. Treat this game as it really was a virus: Avoid it." Ouch. Terrible gameplay in every aspects - and Inner Space has done the computer-virus-invasion concept before, and better. Avoid at all costs. 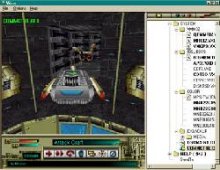