Virtual On Cybertroopers (which I will now refer to as VOOM, as it's sometimes called Virtual On: Operation Moongate) was developed by SEGA's Am3 team (now known as Hitmaker ...an appropriate name, if you ask me), and first released in arcades during 1996, using SEGA's Model 2 hardware (the hardware behind other excellent SEGA games such as Virtua Cop 2, Daytona USA, Fighting Vipers, and Virtua Fighter 2). The basic idea was mech fighting, although it wasn't exactly the most traditional fighting game ever created. The game was (and still is) very innovative, especially in terms of gameplay. Also, it had a very unique control scheme, which used a strange dual joystick setup (not to say it was the first game to do so). It was later ported (very well, I might add) to the SEGA Saturn, which is the first version of the game I was exposed to.

When I first played Virtual On in 1996 or so, I fell in love with it. I liked that is was an unlikely mix of a third person shooter and a fighting game, a bunch of agile mechs beating the parts out of each other, and incredible visuals, among other reasons. Granted, I only really thought of it as a fun diversion, just for dashing about and shooting your opponent. I had no idea what I was in for.

The graphics are excellent, considering the time it was released. The arenas are somewhat simplistic, but well textured with beautiful backgrounds. The VR's ("mechs" that the characters pilot) are nice looking, and all have great animations. I've heard that the game runs pretty bad on older PC's, and it was running poor on mine, until I switched the "motion type" option from "fast" to "smooth". Textured, transparent explosions, weapon trails, and projectiles are plentiful. Graphically, this port is one of SEGA's better Model 2-to-PC ports created. It is, graphically, the closest to the Model 2 version, and it's nice to see the somewhat better looking arenas and VR's after playing the Saturn version so long.

The sound is what you'd expect from SEGA, which isn't exactly bad, yet it isn't exactly ground-breaking. The sound effects all sound as you'd expect them to, and they are very plentiful. In fact, it's possible to tell what VR's are being used in a match simply by listening to the sound effects, which is saying something. I have noticed that the sound is somewhat inferior to the Saturn and Model 2 versions (in the sense that sometimes it doesn't play certain sounds), but it's hardly even noticeable. Also, The announcer sounds like Macintosh Simpletext speak, and fits well with the game. The music is good, yet not what I'd call "classic". It's all mostly of the J-popish sort, with some "heavier" songs in there. There are some songs, however, that really stand out, such as "Into Blue Sky" (Temjin's stage), and "Everything Merges with the Night" (Dorkas's stage).

Of course, the most remarkable aspect of this game is the gameplay. The gameplay is, as I said earlier, a mix of a third person shooter and a fighting game. Granted, it's probably nine-tenths fighting game and one-tenth shooter, but that's not quite apparent at first. You basically select a VR to pilot, and enter a small arena with one other mech. Each VR can sidestep, crouch, dash, and jump, among other things. There are three weapons per VR, and it's possible to shoot countless variations of each. Also, there is a great close combat system, which allows for some incredible fights. Not only is it one of the most original fighting games ever made, but, like any other good fighting game, it is also VERY complex. The more you play it, the better you can get. A "newbie" at this game has absolutely NO chance of winning against an expert, and watching two great players fight is nothing short of breathtaking. There are plenty of small details that can be learned over time, and tons of room for players to create their own techniques and "style". The control scheme, if you have the twinsticks (or a twinstick setup), is dead on. I'm amazed that something this complex fits on two joysticks and four buttons, and everything works so well. Your VR does what you want it to do, the millisecond you want it to.

I do, however, have one minor quibble about the gameplay. When a lot of players start off, they have a tendency to do a lot of dash (namely side-dash) and jump attacking repeatedly. Usually, they see no logical reason why they shouldn't (the logical reason: Long pause afterwards, side-dash and jump attack shots aren't very powerful or homing). Second, they don't know about the little miracle called "jump-cancel". When you jump, you lock onto the other player. Since turning is very slow and clumsy, it is MUCH better to jump, then cancel the jump by guarding. The VR does a little hop, locking onto the enemy in less than a second. So, for those who don't know about the above, the game could get repetitive fast. It would help if the game's manual explained these things, as they aren't very apparent at first.

I have one huge overall problem with this port, but it isn't exactly the fault of the game's designers. This game is terrible with the keyboard. Most keyboards that I've tried this with simply can not "handle" the inputs that this game sometimes requires. A Saturn gamepad can easily remedy this, but finding a Saturn-> PC controller adapter isn't exactly easy. Another (and probably better) way this problem can be overcome with two joysticks, I hear, but I have yet to try it myself. The two-joystick setup would emulate the Model 2 Twinsticks quite well, I'd imagine. All in all, this game is incredible. I'm glad SEGA decided to port some of their games over to PC. The PC doesn't get many good fighting games, so I'm glad that the PC at least got this. Granted, I feel it's somewhat inferior to the Saturn version, but it's a good port none the less. The game's sequel, Virtual On: Oratorio Tangram, happens to be my most favorite game in existence, and is a worthy successor to VOOM in every way. 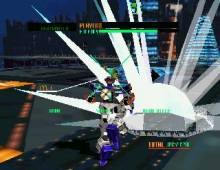 People who downloaded this game have also downloaded:
House of the Dead 2, The, Daikatana, Nightmare Creatures, Destruction Derby, Virtua Cop (a.k.a. Virtua Squad)