Sometimes the game-programmers really demand a lot of imagination - who would think of a human body and virii looking at this game? In Vaxine you are the last line of defense protecting important cells against agressive virii. Such a virus appears in 3 possible colors and can be eliminated by shooting at it with a little ball of the same color. To make this clear right now - at first you will think you got a cool fast action-game here. You will be frustrated soon because you won't survive very long. The game will just get faster and faster if you want it to and you won't be able to defend your cells since you will always miss the virii you try to shoot. You need to think of some basic strategies. Most important things are the black gates. Just drive through one and everything will freeze for one minute (remember to drive through one again before the minute runs out). Now you can search for the next virus and get into a good shooting position before you shoot at it (which will unfreeze everything). While this is enough for the first level you will need to eliminate the virus-producers (flat cells moving around on the floor) first in the higher levels. You will hear a special sound-effect each time one of them appears and that means you have to find the next black gate fast to have time to search for that little bastard.

The problem with this game is that it invites you to get fast and faster and just try your usual shoot-at-everything-that-moves-behaviour. Unfortunately you will run out of "ammo" soon and that causes a Game Over. Don't play it that way! Play it as an action-puzzle. You definitely need some skills with the mouse (don't play it with a joystick!), but it's not the usual action-shooter yuo got here. You need to develop a feeling for the controls and for the way (and distance) to shoot. Don't think that killer-virus only sits there waiting to be shot - it will move in unpredictable ways sometimes and if you are too fast you will just miss it again and again - adapt to it.

The graphics and the 3D-environment were really ahead of its time in 1990, the game is definitely worth a look only for that (in my opinion), but it's not exactly a game you will easily beat at first try.

A unique 3D shooter with frustrating gameplay, Vaxine plays like a cross between Alpha Waves and Spectre. The object of the game is to survive each level by destroying all the enemy cells that appear before they bond together and destroy all of your base cells (which appear as half domes on the floor). The game ends if all of your bases are destroyed, or if one of your three ammo streams reaches zero. Your score is then displayed along with an option to, god forbid, start over.

Vaxine is played on attractive 3D VGA grid, which you can move around easily with the mouse. Enemy cells are difficult to destroy because it is very hard to gauge the distance when your ammo arcs toward the target-- even in the 3D perspective. Worse still, you will only destroy a cell if you hit it with a shot of the same color, and your ammo is very limited. This makes the game extremely frustrating and ultimately unrewarding. If you fancy yourself a joystick god who's beaten every action game ever made, give Vaxine a try. Otherwise, steer clear of this and play something more manageable, such as Alpha Waves 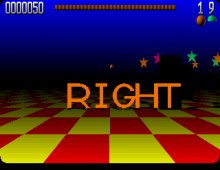 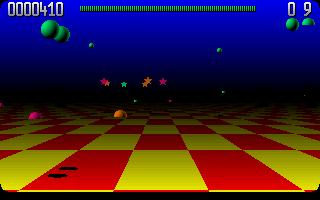