This game is the perfect answer to the question: what happens when you lock the designer of Eliteseries and future designer of Transport Tycoon in the same room? Virus is a furious and addictive action game that, like its designers, exudes creative gameplay unlike any other game you have seen. The premise is simple: pilot a polygonal spacecraft to destroy everything in sight. Levels get difficult quickly, but the robust graphics engine borrowed from Elite Plus makes up for eveything. I recommend playing this game with a mouse, since its control method is excellent. Be warned, though: the game i is very difficult. Don't expect to finish the game unless you are very confident of your reflexes ;) Also, check out the superior 1998 sequel V2000, also on this site. 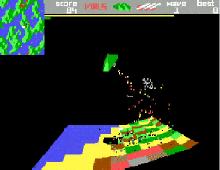