The first difficulty in VajraVanish is... finding the shot and bomb buttons. After some tries, I found them: Backspace and Gray Ins respectively. While such controls are quite uncommon, I must admit that they aren't absolutely bad, and I had no problem in using that keys. But let's see the game... in VajraVanish, you have three lives, five smart-bombs, and five minutes to complete the three levels. "No Problem", you could say. Too bad for you, there are lots of though enemies, which often manage in putting you out of business MUCH before time runs out :P

The background graphics are nothing to write about, only a plain starfield, while the player's ship (a Macross-type robot, to be precise) and all the enemies are extremely well-done. The most powerful ones even show a pixelation effect when hit, altough it isn't refined as the one in Another Zero. The high point of VajraVanish, however, is the extremely fast and furious gameplay: sometimes enemy ships attack in dozens, and the elaborate shots of bosses and mid-bosses give some exercise to your reflexes. Given its short lenght, VajraVanish won't last forever, but the high difficulty, along with the time limit, ensures that you won't finish it in a few tries. Recommended as a quick diversion from Tyrian 2000 or Darius Gaiden. 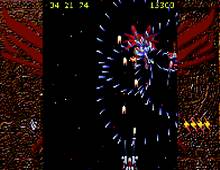