The plot is simple: you're Vinyl, the mars goddess who are supposed to attend the B-movie convention, but your spaceship is caught in a meteor shower.. and so you ended up stranded in an unknown planet in the middle of no where. Actually, at first, I'm not thrilled with the idea of a platform game featuring scantily-clad female, I think I've had enough of Jill , Lara, and such. This game, however, shows great promise. The graphic is o.k, nothing special. The music is uuuh.. not so good. But nevermind about the graphics and music, gameplay is the only thing that counts! Impressive scrolling engine, I must say. Really smooth, IMHO it spars the quality of Epic's Jazz Jackrabbit. The game also shines in the level design. Overall, Vinyl is a decent PC platformer. (Err.. don't you ever hope for a console quality platformer in PC :P) If you loves platform games, I highly recommend this one. 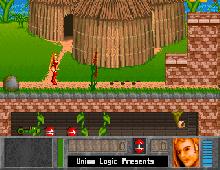