The Untouchables is a horrible platform action in six different episodes, based on Brian DePalma's movie of the same name. You are cast as one of The Untoucables, Elliot Ness, who is going after the ruthless Mafia boss Al Capone. You have various tasks throughout the six levels and a variety of weapons to pick up such as a shotgun or tommy gun to use against Capone's henchmen. The game somehow reminds me of Ocean's Batman: The Movie, just that it's worse. A poor use of blockbuster license, and a lackluster game at best. 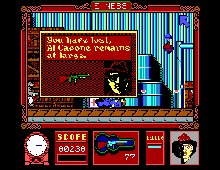 People who downloaded this game have also downloaded:
RoboCop, Star Wars II, Simpsons, The, Tom & Jerry, Simpsons: Bart vs. The Space Mutants, The