Tom (the 'frantic feline' as it says in the intro ;) ) mouse-napped Jerry's nephew Tuffy and now it's your turn (taking over the role of Jerry) to rescue him from the attic. A nice while not smashing Jump 'n Run. Fans of the genre will surely like it, but it's also fun for a little round if you are not so much into Jump 'n Runs. The game's not too hard, mostly fair and the controls are ok. Nothing to complain, but nothing that makes you go 'ah' and 'oh' if you know what I mean. Somewhere around the average I'd say.

Continuing Hi-Tech Expressions' deluge of platform games based on cartoon characters is Tom & Jerry, the second game based on popular cat-and-mouse pair. Nothing revolutionary here, just good ol' platform action that fans of the cartoons will enjoy, especially because the antics of Tom and Jerry are very faithful to the show. This time Tom's mouse-napped Jerry's nephew Tuffy and locked him in a trunk up in the attic. Now it's up to you to help your furry little buddy, Jerry, dash his way up from the basement through every level of the house in order to rescue Tuffy in time. Along the way, you'll encounter dozens of household obstacles, hidden dangers and hilarious surprises... not to mention lots and lots of cheese. Be on a lookout for that devious cat!

Those who like Hi-Tech's earlier Chip & Dale: Rescue Rangers will probably enjoy the game, as well as fans of CAT-astrophe, the first Tom & Jerry game. The addition of inventory is a nice touch, as is the vibrant graphics and bonus levels.

Yay, this cartoon was cool, as so is the game. It's actually the second Tom & Jerry game made the first one being "Tom & Jerry: A Yankee Doodle CAT-astrophe"

Tuffy (Jerry's nephew) has been kidnapped by Tom, and you have to help Jerry rescue him. You will encounter weird enemies such as wind up teeth etc (hehe, that's cool). You may just be a mouse, but you are Jerry, and no clicking teeth can stand in your way! You have to go through the house and rescue Tuffy from the paws of that naughty Tom.

This game is your standard side scrolling platform game. Run and jump, dodge the stuff. The graphics are great, and the sound is what you would expect. PC speaker sound.

To tell the truth, I would rather have been Tom, I've always wished that Tom could just beat Jerry JUST ONCE! But alas, that's too much to ask. Maybe Sylvester can get Tweety instead? 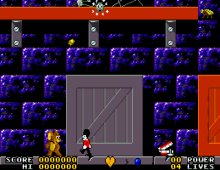 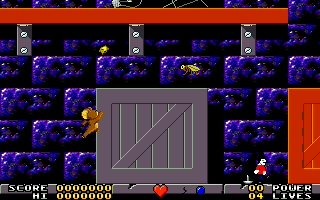