Yankee Doodle's CAT-astrophe is the first PC game from Hi-Tech that star Tom and Jerry, a pair of cat and mouse from a well-known TV cartoons. The game is based loosely on "Yankee Doodle Mouse", an Oscar-winning episode. Gameplay involves you controlling Jerry in a basement chase, avoiding Tom's traps and fighting back, much like the cartoons. You earn points by laying the smackdown on Tom. You can try to run him over in a little car, toss eggs at him, fence using knitting needles, drop lightbulbs at him from a carboard airplane, or toss dynamite at him. Be careful, though, because Tom can go after you, too. If you spend too long in the wall, Tom will throw a stick of dynamite in there. If you stand too long on the egg tossing platform, he'll shoot a plunger from a gun at you. Overall, a funny little fighting game that fans of the cartoons will probably enjoy. Sound and graphics are also above-average for a 1990 game. 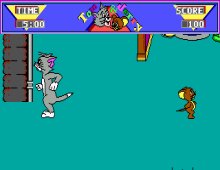 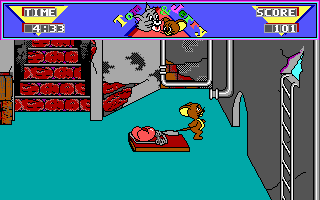