Tunnel B1 was originally made for the Playstation and while it's mostly PC games that are turned into Playstation games Tunnel B1 is different as this game first got its popularity from the popular arcade machine. In short the game is an arcade action flying game where you have to blow up things.

If I should describe a few more details about the actual I should mention that the game consists of very well done flying gameplay where you can fly around in very smooth graphics and at the same time enjoy the well made graphics. It's obvious that Ocean spent a lot of time making this part of the game as superb as possible. The game also offers a lot of action as there are tons of enemies that you have to shoot down and at the same time avoid flying into all the different things there are on the level.

Some would say that Tunnel B1 is a cheap version of Descent but in my opinion your flight is much easier to control and the gameplay is a bit faster as well. Still, in my opinion, a good atmosphere is missing and it's hard to see any point in the game but if you are into the endless games of shooting Tunnel B1 is a recommended game.

A solid PC conversion of Neon's PlayStation 3D action shooter Tunnel B1. You glide around with your B1 hovercraft through dark futuristic tunnels shooting everything that moves. Overall, this is a nice action shooter with decent graphics and good sound. Sadly, the best part of the game, the background music by Chris Huelsbeck, is missing in this CD-rip. Still, great graphics, varied types of enemies, and challenging levels make for a fun game. 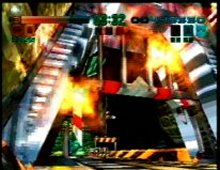