Tronic is a fun, traditional breakout game in the best tradition of Taito's popular Arkanoid. In this reincarnation of Pong, you use the racket, controlled by the arrow keys or mouse, to hit the balls, which in turn will destroy the bricks. When all the bricks for a level have been cleared, you will advance to the next level. Despite being a standard clone, Tronic features a lot of awesome sound effects and music, multiple levels of play, six different kinds of racket, and a full-featured level editor. The game also has plenty of nice surprises hidden throughout the levels, such as the aliens that appear to shoot you. Nothing fancy or original, but if you're a fan of Pong-style games, give it a shot. 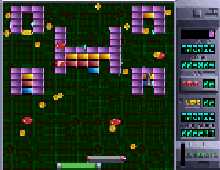