Trauma is an above-average and rare shareware shooter from Spain. The reason it is obscure to most gamers is that it was released only in Spain and Britain. The plot is simple, as with most shooters: destroy anything that moves in your role as pilot of one of the Earth's factions that are vying for total control. Aside from a nifty two-player mode that allows a friend to pilot a ship alongside you in hotseat mode, there is very little here that you haven't seen in countless shooters before. Oh yeah, the game does let you choose different pilots and ships, but in the heat of battle they don't feel that different.

Still, the graphics and ray-traced cutscenes are above average for its time, the levels are diverse, and the game plays very smoothly. These high points make Trauma one of the better shareware shooters out there, although it is far from the 'classic' status of Friendware's better-known Speed Haste. I also felt the game is much tougher than average - lots of explosions from the very first level, and swarms of enemies that bombard you nonstop - so the reflex-impaired gamers (like yours truly) may be better off elsewhere. A greater array of weapons, power-ups, and better-tuned difficulty level may elevate this to the status of Tyrian 2000. 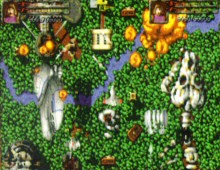