Gunroar is a cool 360-degree top-down shooter from Kenta Cho, talented Japanese developer best known for rRootage and several other excellen shooters that feature abstract graphics, innovative gameplay, and nonstop action. Like Mr. Cho's other games, Gunroar features beautiful abstract art (both for moving units and background graphics), tons of bullets, and spectacular special effects. You can 'lock' your firing direction by holding down the fire button, and press another key to shoot a more powerful bullet that looks like a space-age lance. The game is reminiscent of Activision's classic River Raid in several ways: the nautical setting, the ability to speed up scrolling, and addictive gameplay. If you like shoot'em-up games, Gunroar is yet another superb freeware title that you must play. It may be less original than Mr. Cho's previous titles (most notably TUMIKI Fighters), but it is no less fun than his other games. Highly recommended! 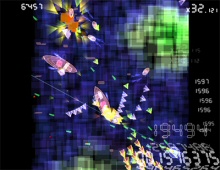