Tube is a mix between a racing game and a race shooter game. You race against another human player or race against the time. Once you have figured out the controls in this game you can start racing. You control this small spaceship and you can get quite a good speed on it, turn around and of course go to both the right and left side. On your way through the race you will have to avoid different boxes bouncing you back if you hit them. You can either jump over them or shoot them to pieces with your gun. If you are getting hit too many times you will eventually die.

The variety in the game is quite small as there are only 3 different tracks and I have had problems seeing a huge difference between them. The game level is quite especially if you play as single player. On the other if you play against another player more fun will be added to the game as don't just race against the time but will have to both beat the time and the other player while still stay alive in the game. The two-player mode is being played through a nicely done split screen mode and both human players can be controlled through the keyboard.

The graphics and controls are together very confusing and you will have to get used to both before you can really play the game. This might scare some players away that will probably never really get started with the game (I almost didn't). Overall not an impressive game but Tube was made just before Bullfrog's more famous High Octane and this title should rather be regarded as an unofficial test game than a regular commercial game.

A fun futuristic racing game that's simple in concept but packed with great gameplay, Tube offers imaginative tracks, obstacles, and cool car designs. As with all Bullfrog games, the animations are very smooth and soundtrack is excellent ... The game was a "test" for a prospective employee, and too bad it was never developed into a commercial game :) 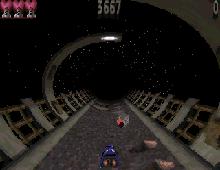