A unique action/strategy game that is hard to categorize, Tracker is a fun futuristic gameshow that pits man against machine in a maze-like arenas. You control a fleet of starships that fly through hallways and passageways in real-time, opening fire against other opponents as well as stationary defenses either automatically, or manually under your control.

The list of innovations in Tracker is seemingly endless. For starters, it was one of the first games that offer a truly functional mouse interface, both for navigating the menu buttons and, more incredibly, moving in a wireframe 3D environment that is much smoother than Mindscape's The Colony, which was released almost concurrently. Another innovation is that the game is played in real-time, with an excellent map that you can zoom in or out to view the action. Yet another innovation allows you to switch into any one of your ship at any time, whereupon you will be viewing the action from inside the ship, looking at the 3D wireframe world I mentioned earlier. This mode is clearly meant for hands-on target practice, although those who are reflexes-impaired can stay at the bird's-eye-view level, giving move and combat orders to various ships from the strategic planning standpoint. This flexibility in Tracker that allows both strategy and action gamers alike to enjoy the game in their own style is definitely one of the best things about the game.

In summary, Tracker is one of the most innovative games of all time that would earn the Top Dog status just on the merits of its technological achievements alone. That Rainbird manages to wrap these breakthroughs around an intriguing game concept is a pleasant bonus. Action and strategy gamers will have a lot to like in this forgotten old game.

Note: Here is more interesting info about the game, by Anthony Lambert, one of the designers: "James Follet wrote the Novella after the game was completed. Although the basic idea was based on a C64 8 bit game by Rainbird that was really crap. We were hired to do 16 bit versions. We totally redesigned it keeping in the basic ideas, multi-ship and AI.

We did versions for the PC, Atari ST, Macintosh and Amiga. The PC was by far the worst version due to the CGA graphics. The game was written mainly in C with assembler for the graphics. We wrote our own game OS which enabled us to write one source code and compile it on PC's using cross compilers to target each machine.

We were the first company I know of that did this with 3D games." 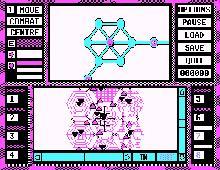