Dino Wars - a game like Archon... with the exception of being good. ;) Seriously, the mixture of strategy and fighting elements works out well here. It might take a while to get used to fighting and some dinosaurs are really pretty useless. So you have to get your best fighters out to the strategically important places. My personal favorites for example are the flying ones... killed about 2/3 of the enemy army with my two before the computer got out his t-rex' - managed to kill the first ones, but they hurt the birdysaurs too bad so they didn't survive long enough afterwards. Anyway - it's a nice strategical thingy. The goal is to catch the egg in the enemy's territory and carry it over to yours - or to simply defeat all enemy dinosaurs.

I remember playing this game when it was new - on my Amiga I think... it's great fun to play with a friend - although I'd really recommend a joystick there. Controls in the fights aren't so good with the keyboard anyway - but if two people are at the keyboard at the same time... don't dare to think of it.

A short technical note: Run this game from Dos (doesn't seem to work under Windows) - also you don't need to install this game (ignore the install files - just start dino.bat).

A fun fantasy boardgame that was equally ignored on the Amiga and PC, Dino Wars puts you in control of an army of dinosaurs as they fight the opposite tribe to capture the egg. Each piece's legal moves are similar to Chess, while the terrain effects and obstacles hark back to SSI's classic Archon. Overall, it's more derivative than innovative, but fun nonetheless. 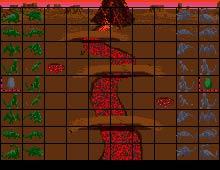 People who downloaded this game have also downloaded:
Prince of Persia 2: The Shadow and the Flame, Gauntlet, Gauntlet 2, Cool Spot, Destruction Derby