Among freeware SHMUP designers, few names have become associated with quality as Kenta Cho of Japan. His games are consistently addictive, unique, and eminently replayable thanks to creative uses of the D programming language and BulletML, a programming library coded by designer himself, and Mersenne Twister, a fast random number generator that is used to create random enemy patterns that have become his hallmark - alongside hypnotically beautiful abstract graphics.

Torus Trooper moves the action away from space to the ground: more specifically, a tunnel that you speed through at impossible speeds, blasting enemy ships in sight. Your goal is simply to destroy as many ships as possible before time runs out. You earn bonus time when you reach a certain score, and lose precious seconds each time your ship is destroyed. After you kill a certain number of enemies, the 'boss' enemy appears. Killing these bosses give you more extra time. That's pretty much all there is to the game, but like all Kenta Cho games, you will find yourself hooked in no time. Since the tunnel floor does not span the entire arena but have missing gaps and curves, you have to pay as much attention to steering the ship as shooting and dodging enemy bullets - giving the game an added dimension of challenge that is absent from rRootage.

In terms of originality, Torus Trooper is not as unique as, say, TUMIKI Fighter, but it is still incredibly addictive and pretty to look at. Highly recommended to fans of SHMUPs and futuristic driving games. 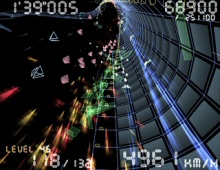