Terra Cognita is a fun fanmade remake that achieves what few remakes manage to do: make the game even more fun than the original. And in this case, the achievement is even more noteworthy because the original was not - contrary to most other games that got remade - one of the best in its genre.

Originally released in Codemasters for many 8-bit systems excluding the PC, Terra Cognita was a typical 2D vertical shooter game that is similar to River Raid, but much less fun. This remake changes the perspective to pseudo-3D: you view the action from an isometric perspective, with the landscape scrolling down toward you. As a futuristic "Mining Engineer," your goal is to escape in a small scout ship. More specifically, you must pilot the ship over 100 screens of alien terrain, passing over power-up tiles that can add extra fuel, speed you up, or give other bonuses. You must also avoid bad tiles that can slow you down, or - the most annoying one - "time slips" tiles that will warp you back to the first screen.

This PC remake of Terra Cognita is still as much fun (or as frustrating, depending on your skills with arcade games) as the original. The game even lets you choose from original graphics ("ripped" from Codemasters version) and updated graphics. Unfortunately, the game does not save your high scores, but that is a small nitpick compared to how authentic it feels. If you like "retro" shooters, or just shooters in general that are harder than River Raid or Zaxxon, Terra Cognita should definitely be on your playlist. Recommended! 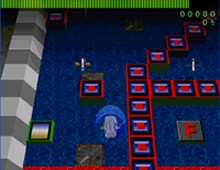