Terminal Terror is a much-improved sequel of sorts to Pie in The Sky's campy 3D shooter Lethal Tender. Despite banal graphics and cliché plot (another Rambo-style infiltrate-and-capture mission), the game offers many innovative features that didn't become standards in the genre until id's blockbuster DOOM. Among the most notable features in Terminal Terror that add a nice touch of realism to the game include:

Civilians. If you kill them, you'll be branded a "renegade" and thrown in prison. You could try Ninja Kicks and GOO Gun attacks on them with impunity, though ;) Inventory area. This allows you to keep items that you don't immediately need to us, such as medi-paks and ammo.Grenades, which can be thrown at varying distances. The longer you hold down the spacebar key, the farther the grenade will travel. They will realistically bounce off walls, and you are vulnerable to their explosions unless you have the Gas Mask in your inventoryRemote-controlled time bombs. This is a fun feature that predates DOOM by at least a few months.Some very creative weapons. The Sticky GOO Gun, for example, encases the enemy in a sticky substance that can't be removed without the anti-agent. So you can completely disable enemy guards and finish them off with something else.On-screen radar, which always shows your position relative to the area you are in. It is extremely helpful when you are lost in a dark area or a maze. You must first find the radar, but it's automatically activated once you put it in your inventory. Different effects from hits on different body parts. For example, if your right leg is hit too many times, you will not be able to walk straight-instead, you will always tend to gravitate to the right when walking.

In addition to these novelties that make the action more fun and varied, Terminal Terror also sets itself apart from other FPS by focusing equal attention to avoiding combat. Learning to sneak past the enemies is crucial to your success in the game. A special display shows how vulnerable you are to enemy detection; the higher the number, the harder you are to detect. There are many factors which go into your profile. The profile is raised by fast movement and shooting, and it is lowered by stillness and non-lethal weapons that don't make a lot of noise. Definitely a cool concept that predates Thief by a few years.

Overall, I find Terminal Terror a surprisingly enjoyable game that has a lot to offer. Too bad its mediocre graphics and a low profile (marketing-wise) condemn the game to obscurity-until now, that is. If you play FPS for gameplay and not pretty graphics, you'll find much to like in this old game. The game even has multiple paths and optional missions depending on the choices you make during the game. 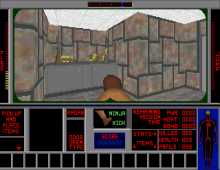