Tankkk was a bliss in it's time. This Finnish shareware oldie boasts not only two, but three tanks. There's no dirt to dig around. Instead, a maze-ish arena is given for the players to fight in. There are enough options to choose from to make it play differently if wanted, you can choose from two different levels (agreed, not much) and choose whether shots bounce from or destroy walls. Different tactics are required - if you play with the latter, you'll probably try to burrow through the walls to get at your opponent, while ducking away with the remains yourself, kinda Space Invander-ish way.

On the other hand, with bouncing shots, you'll be aiming around the corners and having fun with ricochets. By setting the distance of shots at maximum, you can fire a string of shots which seem to bounce around forever - as you can only fire five shots each time. There the game becomes a little strange, as you'll be waiting for your weapon to "recharge" and dodge those bullets, trying to fool your opponent(s) into them. The controls of the tanks have a bit of an inertia, and it's possible to get stuck on a wall, in which case you must hit reverse - controls are kind of peculiar, and playing this game is unlike any other. Especially if you have two friends to play with, and a keyboard that doesn't keyjam (too much), you might be having some fierce competition and a load of fun. 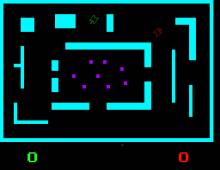