Threat is one of the best shareware action games ever made, bar none. Dan Nguyen said it all in his review for Games Domain:

"There are only a handful of shareware games from the Internet that are worth the download time, and yes, Threat is one of them. It has a very slick professional look to it, with detailed SVGA graphics and nice tunes to fit with the action. The gameplay is like Gauntlet, except instead of throwing axes and arrows, you are throwing grenades. You are a security officer on an asteroid colony which happens to be invaded by aliens, blah blah, and you have to, of course, get rid of them.

The view is an overhead view, which looks down on the playing field. The playing field is one screen of mayhem and terror which your character has to navigate through to get to the goal, while dodging scorpions, bazooka firing maniacs, machine gun wielders, and much more. To help you, you have an array of weapons, including tri-shooting machine guns, mines, grenades, homing missiles, and a several more tools of destruction. The goals usually are getting to the destination in time, or blowing up dangerous explosives. After you complete your mission, you get a money reward, which you can purchase more weapons with. You also get rewards from killing monsters, although many are not too desirable... Monsters aren't the only ones who get killed in this game; you will soon find yourself, especially in multi-player mode, getting reduced to a puddle of blood, either by a deadly mine a monster laid out, or a missile that your friend happened to aim at you. BTW, you have an energy meter in this game, so you can stand a few direct missle hits :)

This game, if you hadn't surmised yet, is a shoot em' up game in a style similar to Smash TV. What makes this game really fun though, is the option to play with 2, or 3 players. There's nothing funner than running with your pal annihilating ugly monsters and working together to complete some of the harder areas. The designers must of guessed that we like to blow away things, but also our "friends" :) , so they included a battle mode in which the players are head to head in an arena of death.

[Overall, Threat is]... an excellent shoot 'em up that deserves to be ranked among the high end shareware games out there; then again, any game with guns and aliens is a good one :)" 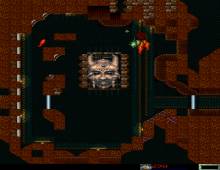