Super Monster Painter Extreme is yet another addictive cartoony arcade game from Johan Peitz of Free Lunch Design, maker of a great freeware classic called Icy Tower. In the author's words, this is "...[the] game which revolves around colors in general and mixing in particular. It can be played by one or two players. One player controls the horizontal painter and the other controls the vertical one. Hit fire to make the painter jump up on the tube and squirt color into the room. Monsters who inhabit the room have different colors. If they are hit by paint of correct color they die. As the game progresses, more monsters will come up through the gratings. In later stages these will have a mixed color from the beginning. Sooner or later the player(s) wont be able to keep up and the room will be filled with monsters. Before it happens, make sure you make proper use of the powerups you're given in order to maximize your score. The game has a soundtrack whose intensity matches the tension in the game. More monsters = hectic music!"

Like most games from Free Lunch Design, SMPE is a polished freeware gem that offers excellent graphics, smooth animations, and fun gameplay that is not wholly original, yet feels different enough from most other games to feel refreshing and unique. Highly recommended, especially if you have a friend to join in the two-player co-operative mode - the game gets really tough in later levels, and trying to co-ordinate the right mix of colors at the right time is very fun. 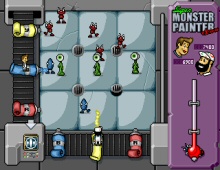