After breaking into the puzzle genre with Boston Bomb Club, Silmarils continued to diversify into unfamiliar territories with Storm Master, a game that combines action/adventure mix with strategic elements. Set up a spy network, wage wars, build windmills and flying machines, and trade with others in your quest to become the Storm Master. The notorious difficulty level is manageable this time, making this more playable than most Silmarils games. 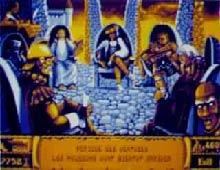