Highway Pursuit is a great arcade-style game that takes its inspiration from a number of classic games, but plays most like Midway's classic Spy Hunter - so much so that I have decided to assign this an 'alternate name' for the game, so that anyone looking for Spy Hunter on our search engine would find it ;) As the author puts it, the game "...[is] an action-packed 3D blast along roads filled with enemy agents -- but also with innocent civilians that you should protect at all costs. Featuring diverse landscapes and scenery, a variety of enemy vehicles, multiple weapons, weather effects, radio communications from your HQ, 3D sound effects, configurable support for keyboard, joysticks and steering wheels."

Similar to Spy Hunter, your job is to maneuver a machine gun-mounted car through the road, trying to avoiding innocent cars and destroying evil agents who are chasing you. You get points for each agent car you destroy. The machine gun ammo is unlimited, but there are many other weapons that you will get along the way - by climbing into the "weapon van" that will show up from time to time. The playability is superb: the sense of high speed in Highway Pursuit is authentic enough to give you adrenalish rush, and the AI of enemy cars is decent. Sometimes the evil agents will try to ram you, although disappointingly they don't shoot (which would have made the game even more fun). If you ever spent countless quarters playing Spy Hunter in the early 1980s, Highway Pursuit is the next best thing to reliving the memory. It's freeware, and it captures the feel of arcade original much better than Spy Hunter 2, Midway's recent 3D remake that the company outsourced to another developer. 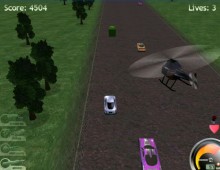