Steel Thunder is a fun tank simulation from Accolade that emphasizes arcade-style action over realism. Take control of one of four WW2 American tanks ranging from the M1 to Abrams, and engage in shootouts in both day and night missions. Despite simplistic gameplay, the game does feature semi-authentic control panels and tank animations. Simulation purists won't find much to like here, but it's a great game for action-oriented gamers and fans of Accolade's Gunboat. 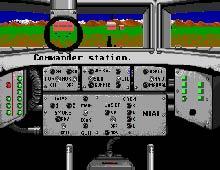 People who downloaded this game have also downloaded:
Star Fox 2, Star Quest I in the 27th Century, Star Crusader, Skyfox II: The Cygnus Conflict, X-Men: Children of The Atom