A solid 3D space combat underdog, Star Crusader has it all except the hype: great graphics (if not as sharp as Wing Commander), lots of cool and colorful ships, over 100 missions, and a great "space opera" plot about intergalactic family feuds that unfold as you progress. Best of all is the surprising strategic element late in the game that allows you to plan missions and allocate strike forces. Great fun despite awkward controls and questionable AI of enemy ships. 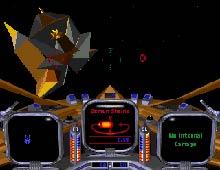